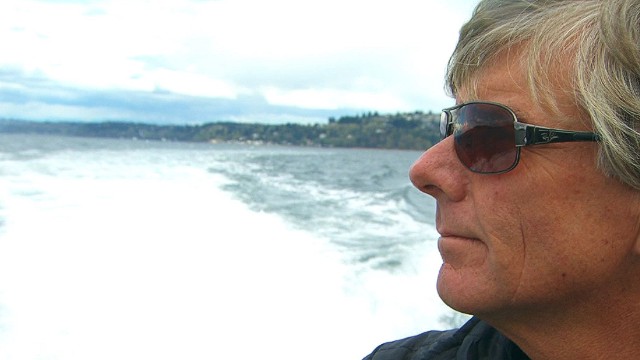 Seattle, Washington (CNN) -- After sprinting for more than an hour up the Puget Sound, a group of migrant killer whales suddenly slowed and began circling so close to our boat, that we could hear bursts of air as they exhaled through their blowholes.

"That one's got something in its mouth right there," said Jeff Foster, the marine mammal expert on board the boat. The dorsal fin of one of the whales sliced up out of the water, protruding more than four feet out of the water, like some kind of black windsurfing sail.

These transient orcas, which may have traveled to the Pacific Northwest from as far away as Central America, appeared to be sharing a snack: an unlucky harbor seal.

Foster has a lifetime of experience working closely with killer whales, one of the world's largest predators. His unique relationship with orcas is one that has evolved over the decades.

By his own account, the Seattle native was only 15 years old when he first got involved with capturing killer whales in Puget Sound.

In the 1960s, this port was the birthplace of the captive killer whale industry.

For Foster, the son of a prominent wildlife veterinarian, getting the chance to work with the Seattle Marine Aquarium capturing and training killer whales was a dream come true.

"It was amazing to have these big, giant, powerful animals and you're manipulating these things around like they're almost a balloon," Foster recalled.

In the early days of the captive whale industry, Foster and his colleagues were celebrated for their achievements. In 1965, when his mentors captured the first killer whale, Namu, Foster says they were given the key to the city of the Seattle, and featured in National Geographic.

Foster captured a couple dozen whales during almost two decades, beginning in 1972. He says during that time, the industry experienced tremendous turmoil.

I started to feel guilty, separating a mom from a calf... It's almost like a baby's cry, and it tugs at your heart. Jeff Foster, former whale capturer

"In a few short years, things started changing. People realized that these animals were highly intelligent and we started learning more about them in the wild," Foster recalls. "We learned that these whales stay in social groups for their entire lives."

Activists began to question the manner in which whales were captured.

"When they saw how the captures took place, there was a lot of outcry," Foster says.

In 1976, Washington state sued SeaWorld, then Foster's employer, for allegedly violating the terms of permits used for whale captures and won.

Foster says that as part of the decision, "we agreed that we would no longer capture killer whales in Puget Sound, but we would instead get permits from outside the country."

So Foster and his team packed up their operation, and headed to Iceland, where he worked as a contractor for SeaWorld and other companies and began capturing the large sea animals in the icy waters of the North Atlantic.

The former killer whale hunter shared hours of home videos of the captures, some of which he filmed in the 1980s.

In some cases, Foster can be heard narrating as fishing trawlers operating in the open ocean encircle a family of killer whales and isolate individual animals.

"Still got two [whales] in the net. Oh! We got four in the net!" Foster says in one video, filmed at night.

When the fishermen then hoist a young whale out of the water using a crane and a net, the whale can immediately be heard emitting high-pitched squeals of panic.

The distress calls continue hours later, after the whale has been transported to land and eventually lowered into a shallow pool.

In one of the videos, Foster can be seen helping a recently-captured young whale swim in the chest-deep pool. The animal is so disoriented after capture that it is unable to keep itself upright in the water. Dressed in bright orange dry-suit and sporting the same shaggy blond haircut he wears today, Foster guides the whale around the pool, massaging its flippers.

In a separate video dating back to 1986, four young whales are seen lying at the bottom of a drained pool, periodically squealing as a veterinarian injects them with antibiotics, and as other members of Foster's team hose them down with water.

By Foster's account, he assisted in the capture of dozens of whales from his base in Iceland.

'I felt less and less excited'

But as time went on, he says, the hunters had to adopt strategies to avoid getting targeted by activists.

"We traveled under different names sometimes. By the mid-80s, some of the activist groups infiltrated SeaWorld and some of the other marine parks," remembers Foster. "They were seeing what the industry was like from the inside. And things really started changing at that point."

It was then, Foster says, that SeaWorld decided to not do any more wild captures.

Foster had also begun to question the practice. "I felt less and less excited each time I did it," he says.

"I started to feel guilty, separating a mom from a calf," Foster admits. "It's almost like a baby's cry, and it tugs at your heart."

"But I justified it by saying that it was for its educational value," he adds.

Over time, Foster began to doubt his own justifications for the captures.

It got to the point where I was literally looking in the mirror and I said, I can't do this. I cannot be involved in any more captures of killer whales.Jeff Foster

"I started spending more time with animals in the wild than in a captive situation. And I felt the more we learned about them, the more strongly I felt they shouldn't be in concrete pools. I just don't know if we can make a concrete pool big enough," he says.

So Foster left the industry in 1990, turning his attention to animal conservation. In subsequent projects, he rescued and rehabilitated marine animals and began to help return them to the wild.

One of those projects involved returning Keiko, the killer whale that became the inspiration for the blockbuster film, "Free Willy," back to the wild. After spending decades in captivity, Keiko was eventually released off of the coast of Iceland, but he died the following year.

Foster also helped rehabilitate the killer whale Springer, which was found lost and disoriented in Puget Sound. In 2012, CNN interviewed Foster on the coast of Turkey, where he was working with the environmentalist organization Born Free, on a project to release two abused captive dolphins back into the Aegean Sea.

He got an offer of major dollars

But it was around that time that Foster says he got a very tempting offer to return to the hunt. That offer would have allowed him to retire as a multimillionaire. And it proved almost too hard to refuse.

Foster says he was offered $7 million to capture killer whales off the Pacific coast of Russia. Brokered by an Eastern European middleman, the deal called for Foster to capture eight killer whales. Six of them would have gone to Chinese buyers, Foster says, while the remaining whales were promised for another high-profile destination.

"There was mention that two of the animals would be going to the Olympics, to a town I had never heard of, Sochi," Foster said.

Sochi, the Russian city that hosted the 2014 Winter Olympic Games, was embroiled in controversy a few months ahead of the opening ceremonies, after word leaked that the Sochi Dolphinarium, a small dolphin park in the city, would put two new orcas on display to celebrate the games. 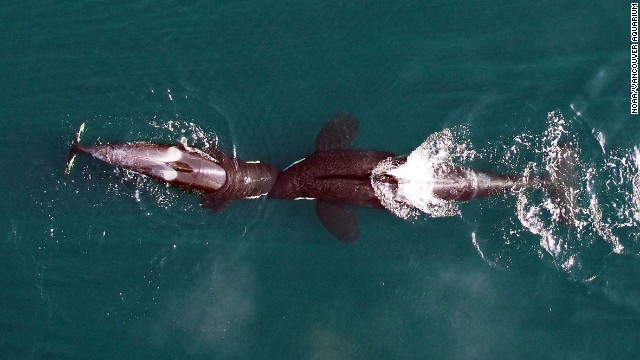 Killer whales from above

The Dolphinarium issued a press release calling those reports a hoax aimed at slandering Russia's Winter Olympics, and denied it had ever intended to acquire the whales.

But a permit issued by the Russian fisheries agency says otherwise. That 2012 permit authorized the capture of two killer whales from the Sea of Okhotsk.

And the Far East Russia Orca Project, a killer whale watchdog group, says that more than half a dozen orcas were indeed caught last year in the Sea of Okhotsk.

But it wasn't Foster who captured them. He says he turned down the lucrative offer for moral reasons.

"It got to the point where I was literally looking in the mirror and I said, I can't do this. I cannot be involved in any more captures of killer whales," Foster said.

But Foster hasn't strayed far from the animals he grew to love and care for. He is now involved in the effort Free Morgan, focused on a killer whale that is currently at the SeaWorld-affiliated park, Loro Parque, in Spain's Canary Islands.

Morgan was brought to the marine park after she was found disoriented and sick off the coast of the Netherlands.

On two visits to Loro Parque, Foster says he saw Morgan abused by larger killer whales and said she was so despondent she was banging her head against the side of the pool. He says she also constantly called out for her missing family.

"She made these loud screaming calls, and it's continual, over and over," he says. "At that point, it really hit home that this poor animal is in a terrible situation with a very dysfunctional group of animals."

Foster says he realized that Morgan needed to be moved so that she would no longer suffer, so he added his voice to the "Free Morgan," campaign.

But in April, after a lengthy, multi-year appeal process, a court in the Netherlands disagreed -- ruling the whale should stay in the park.

In an impassioned statement, the park's owner defended the court's decision by saying, "I honestly think that this decision can be seen as a pardon for Morgan because her release would have meant suffering and death."

For now, Morgan remains at Loro Parque, and with little legal recourse to change the outcome of her case, this former orca hunter is learning it's far easier to capture a killer whale than it is to set one free. 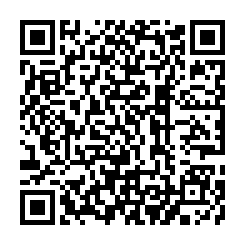