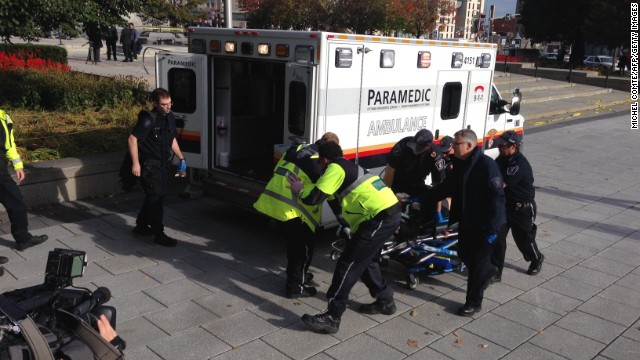 (CNN) -- Peter Henderson heard gunshots ring out late Wednesday morning from the National War Memorial in downtown Ottawa, Canada, as workers were rolling into the office a little late, coffee in hand.

"I was locking my bike up, and I heard four shots," said Henderson, a journalist who reports on the telecom market.

He looked toward the memorial's soaring granite arch and saw a fallen soldier, in ceremonial uniform with white gloves. The soldier had been standing guard at the monument with a second soldier.

"I saw one of the soldiers laying on the ground," Henderson said.

The soldier appeared to be shot in the back, with "catastrophic" wounds, Henderson said. That soldier later died, according to a statement from the Ottawa Police Service and Royal Canadian Mounted Police.

Other witnesses, including members of Parliament, flooded social media with accounts of the attack, including photos and videos. Collectively they painted a portrait of chaos breaking out on an otherwise routine day near the corridors of power in the Canadian capital.

Police reported at least two shooting incidents in downtown Ottawa: at the National War Memorial Museum and on Parliament Hill.

One suspect was killed, the police statement said, and the joint police operation continued throughout the afternoon in a search for possibly other suspects.

In the immediate aftermath of the war-memorial shooting, the second soldier on guard duty "ran for cover," Henderson said. The guards are thought to hold rifles that are not loaded, he added.

The shots sounded like they came from a high-powered rifle, Henderson said.

Later, bystanders rushed to the fallen soldier and began to perform CPR, he explained.

"To the best of my knowledge, (he) looked like ... a young man," Henderson said. "It appeared as though he had been hit in the back several times."

At Parliament, shots rang out at around 10 a.m. ET as Parliament members, including Prime Minister Stephen Harper, prepared for caucus. Some members tweeted that they heard many shots.

MP Tony Clement tweeted that he heard "at least 30 shots" and apparently was able to take cover with colleagues.

He tweeted that Harper was secure.

Canadian Deputy House Leader Kevin Lamoureux was attending a caucus meeting when security told everyone to clear the building.

"I honestly thought it was a fire alarm situation," Lamoureux told CNN.

As soon as he was leaving the caucus room, he heard the gunfire, he said.

He was inside Parliament, on the ground floor, when shots rang out. He was one level below the gunshots and was among those who were evacuated to another building nearby.

There was panic as people rushed out a door, he said. Lamoureux said he heard no screaming or other sounds before the shots rang out.

Another member Tony Clement tweeted, "I'm with colleagues Mark Strahl and Kyle Seeback. PM was in Caucus but now secure. Assuming it's not safe to venture out yet ..."

Clement tweeted that there were "at least 30 shots."

Ottawa journalist Josh Wingrove told CNN that he saw someone injured -- he described it as a motionless "body" -- in the main building, near the entrance to the Parliament library, following the gunfire.

Wingrove was inside Parliament and heard dozens of shots.

Wednesday morning's gunfire in the main Parliament building started in the foyer, and a second round of shooting happened about a minute later in a hallway or near the entrance to the Parliament's library, Wingrove said. Several officers had weapons drawn, and most of the dozens of shots that he heard appear to have been fired by officers at the gunman, Wingrove said.

Wingrove was among those forced to remain in the building during a police lockdown, as officers checked each room, he said on his Twitter account.

After the gunfight, "the smell of gunpowder is heavy in the hallways," he tweeted.

Matt Millar, the Ottawa bureau chief of the Vancouver Observer, was in the hallway above the gunfire in Parliament.

He heard what he described as a very loud noise "followed by several shouts and, by my count, about three dozen rounds of handgun fire."

He and colleagues escaped their office by breaking a window on the third story, and construction workers assembled scaffolding to help them, Millar said.

But he and others had to undergo hours of lockdown Wednesday in a secure building "just a stone's throw from (Parliament Hill)l," Millar told CNN.

"I was walking to my caucus room and literally taking off my coat when I heard this pop, pop, pop -- didn't really think much of it -- thought it was frankly construction" on Parliament Hill, he told CNN. "Then the security people came racing down the hall and ushered us out of the building ASAP."

When they arrived outside in the back of the Parliament buildings, "a construction guy says maybe if there's people inside shooting, maybe we should be standing behind one of the monuments instead of standing out here like sitting ducks," McKay said.

McKay and the group then found a monument as a shield against a potential gunman, he said.

As the group talked about how the gunman apparently ventured near caucus rooms, "at that point things really started to sink in and you realize it's a significant incident," McKay said.

John Ivison, a political columnist for the National Post, was five minutes from Parliament Hill when reports came about the gunfire at the war memorial. He and a colleague arrived at the monument "to find a scene that is going to change this country forever," Ivison wrote.

"The young soldier was wearing a kilt -— he is a reservist from the Argyll and Sutherland Highlanders of Canada in Hamilton — and appeared to have a bloody chest wound. The thought struck me that there should be a very special place in Hell reserved for a terrorist who shoots a soldier guarding the Tomb of the Unknown Soldier that honours this country's fallen," Ivison wrote.

He posted a note on his Twitter page: "Canada has just lost its innocence."

"Maybe it was naïve, we probably lost our innocence a long time ago. But there was a very real sense that nothing will ever be the same again," Ivison wrote in the National Post.

"We were waiting there for a city tour and suddenly I heard four shots," Lugtenborg said. "Suddenly I saw a small guy with long black hair ... with a long rifle, and he ran away after the shots, across streets in the direction of Parliament Hill."

Scott Walsh, who was working on Parliament Hill, told CBC that he saw a man running with a double-barrelled shotgun, wearing a scarf and blue jeans, who hopped over the stone fence surrounding Parliament Hill. The gunman forced someone out of a car and then drove to the front doors of Parliament and fired at least two shots, Walsh told CBC. 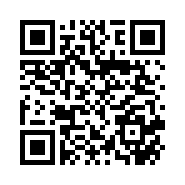